Behind The Scenes: What Does A Day In Late & Live Look Like?

I’m Hayley O’Toole, I am the Content Delivery Supervisor in the Late and Live team. I have worked in Content Delivery since 2018, where I began my role as a Late & Live Coordinator. I took on the role of team supervisor in January this year. As Supervisor, I oversee any operational tasks and ensure all required content is delivered on time and without issue. The team’s main priority is to capture ITV’s live content from the broadcast stream, which is then uploaded onto the ITV Hub and various other catch-up platforms. When I began my role as Late and Live Coordinator, the live capture process was a totally new addition to the Content Delivery department in Leeds, since then we have continued to develop and take on new responsibilities which has helped with the growth of the department.

To capture all of ITV’s live content we use the M2A Console. The console allows us to record content from any of ITV’s channels and then edit live, removing any advertisements before delivering onto catch-up platforms, including ITV Hub. Another crucial task the Late and Live team perform is live compliance editing. Using the live capture console with M2A, we can identify and remove any offensive or liable sections prior to delivery. As we can deal with these issues instantaneously, it prevents further escalation from other areas of ITV and inevitably causes less issues down stream. It also means our viewers can access material on catch-up much quicker!!

We are a dedicated team of four and work on a rotating shift pattern everyday between the hours of 05:30am to 00:30am to ensure all live content is captured, whether it is Good Morning Britain in the early hours or the News At 10 in the evening. We capture and deliver around 7-8 hours of live daytime shows daily. The live schedule can vary day-to-day and we often have busier time periods where there is an influx of live sport or a high-priority primetime show such as Love Island or I’m A Celebrity…Get Me Out Of Here to capture. Our role is time critical and we endeavor to capture and deliver all content as soon as possible, so it’s important we are prepared for these occasions. If content is not captured accurately and in a timely-manner, ITV’s audiences could be left disappointed.

In current times when viewer habits are changing regularly and television is no longer only viewed traditionally from the linear broadcast, demand for catch-up content is greater than ever. Viewers can catch up on their favourite shows when it suits them, whilst still ensuring they don’t miss out on any must-see moments. That’s why our team is so committed to meeting viewers expectations and always providing a reliable service. For the past few years, we have worked on Love Island over the summer (and the winter special earlier this year!), each time we have been committed to preparing the content so it’s ready to go as soon as the main broadcast has finished. This has been really rewarding for the team because we have exceeded expectations and delivered the show to the ITV Hub quicker than ever before. It’s great to be part of this success and see the positive response from viewers. Most episodes of Love Island attract over 1 million additional viewers on the ITV Hub each night! That’s quite a lot of pressure, so it’s imperative that we get it right, every night.

Alongside the capture of live programmes, a typical day for the team includes editing and delivering pre-recorded content for selected VOD partners. For these tasks, we source the content either via tape from the ITV Archive or by file, we then check for any visual or audio errors before delivering.

A great benefit of our working hours means we are on hand to pick up any urgent ad hoc requests straight away. This could be a requirement to timecode capture broadcast content which is TXing that evening or a request over the weekend to create a browse file which requires subtitling. We’re always on hand to help process any content our customers from outside ITV, and it helps ensure deadlines are never missed as the team aren’t reliant on traditional Mon-Fri office hours.

Whatever your requirement is of ITV Content Delivery, you can rest assured that, thanks to the Late & Live team, we’re available night and day to help you!! 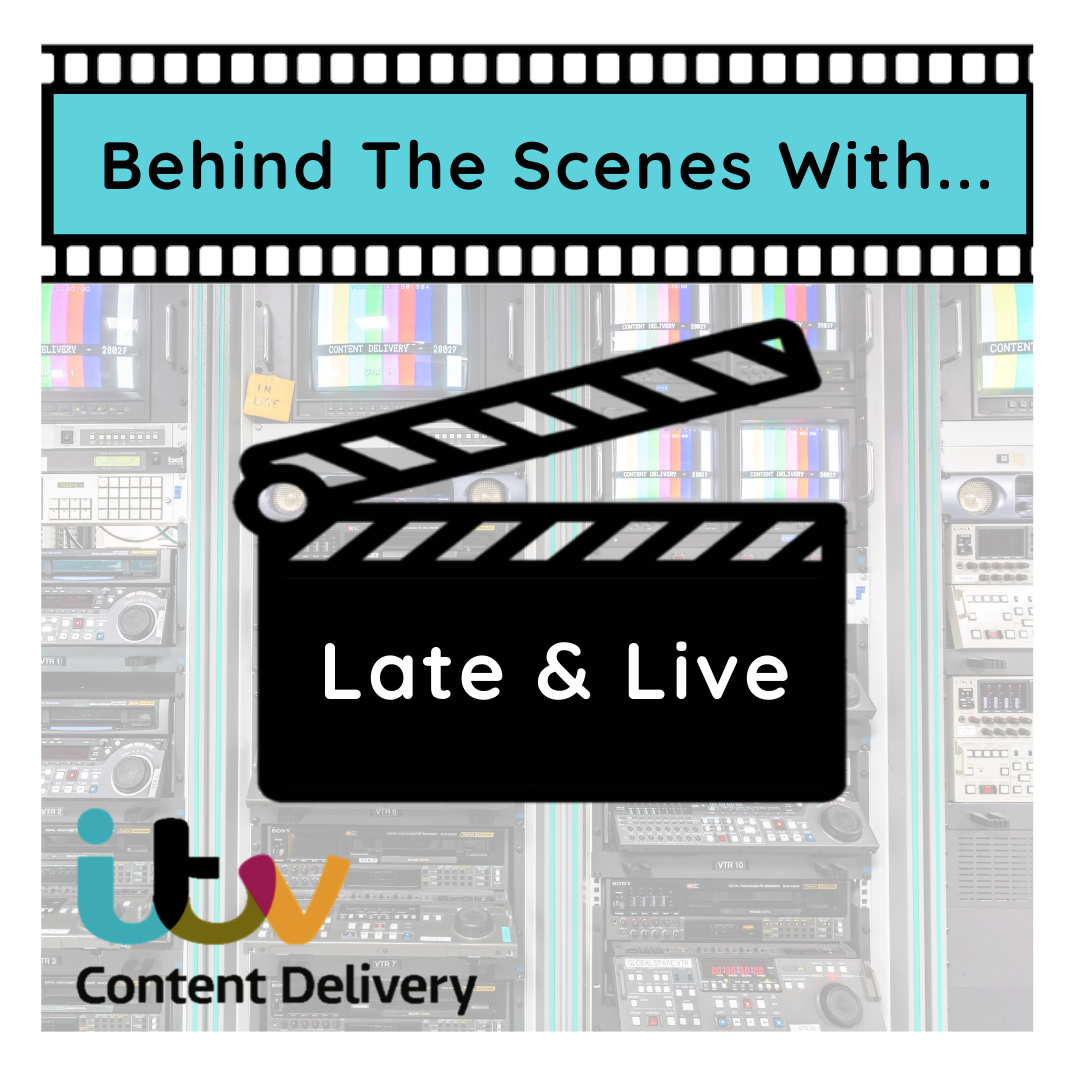