ITV Content Delivery have been working very hard recently on a major restoration project for Britbox, ITV and BBC’s joint SVOD platform showcasing the best of British TV. Josh Clark has been working on the restoration of the film classic, “Carry On Up the Khyber” and he wanted to share his experience….

“Often, confronting the beginning of a project raises a specific question: Where do we start?”

That wasn’t a question we were faced with when initially commissioned to complete the first of new streaming service BritBox’s high-definition restorations of British film classics. The first title to be restored was 1968’s Carry On Up the Khyber, and no native HD version previously existed of the film. The starting point, then, was obvious; find the best quality print available to us and create a brand new HD scan, ready for restoration. We were in luck, as our in-house archive contained a complete set of inter-positive reels that were in very good condition. Running the film through our scanners, details could be picked out that had not been seen for decades, in the fine dust of the battle scene’s rubble, and in the individual fibres of the Third Foot and Mouth’s fake beards.

We made the decision to scan in ultra high-definition, partly as a means of future-proofing, but largely because it would allow us to overscan, stabilise the frame, and then scale down to HD. If we were to overscan in HD, we would then have to scale up, and detail would be lost as a result. Once scanned, the real work could begin. Although the film was in good condition, it wasn’t flawless. Colours, as always, needed correcting, dust and scratches required removal, and frame instability had to be steadied. So, back to that question: “Where do we start?”

We like to correct the colour levels as a first priority. We tend to scan the film at a fairly low contrast, to avoid any risk of crushed blacks or overblown whites, and in this low-contrast state it’s more difficult to pick out imperfections: scratches aren’t as defined, flicker is less prominent, etc. A properly balanced film is two thirds of the way to how it would’ve looked on release, and it focuses the eye on what needs to be done to get it the rest of the way there, or at least as close as possible. That’s easier said than done, as what exactly is a ‘properly balanced film’ when it comes to someone else’s work, let alone a piece of British cinema history? We don’t have the director or cinematographer to tell us how red a captain’s uniform, or how dark the shadows of a dungeon, should be. We are forced, therefore, to rely on a combination of previous (standard definition) transfers of the film, and our own judgment. The problem we had was that multiple different transfers already existed, and each had a slightly different colour palette. Where one may have a cooler tone to a character’s skin, another looks warmer. A wall may look blue on one transfer and teal on the other. We decided to proceed with the existing transmission master as the colour reference, as this was the version that would originally be available to view on BritBox. Matching to this as closely as possible would serve to highlight the differences between the original SD and our new HD version.

Another issue we faced is that degradation of the film can cause minor fluctuations in colour levels from frame to frame, resulting in a slight flicker. This can be across the whole of the frame, or localised to specific parts of the image, such as a shadowy area that has a more prominent flicker than a brighter area. Our restoration software, Phoenix, can pick out localised flickering, even if there isn’t much fluctuation across the whole frame. This works great with a mostly static shot, but a shot with significant movement can confuse the algorithm and cause ghosting. The software allows us to tune the algorithm to ignore localised fluctuations, reducing the risk of ghosting at the cost of effectiveness. In other words, we’d rather leave in the occasional flaw caused by time and the nature of film as a physical medium, than introduce new digital artifacts in the meantime.

This philosophy extends to other imperfections. Dust and dirt settling on the surface of the film is an unavoidable part of the format, but we always set out with the ideal of removing it all. Our physical film cleaners get us most of the way there, but deeply embedded dust inevitably makes it past our cleaning process, causing large blemishes that require digital removal. Phoenix analyses multiple frames to pick out these blemishes, and uses the frames before and after to cover it up. The tool can be tweaked to be as aggressive as required, and we can manually remove any that it misses, so in theory we can remove all of the dust and have a spotless film. The problem is that the more aggressively the software looks for things to remove, the more likely it is to result in false positives, removing items that are supposed to be part of the scene. For example, in the battle scenes in the final act of Carry On Up the Khyber, we came across three elements that the software was repeatedly picking out as a defect to be corrected: flashes of gunfire, rubble from explosions, and the thin swords of the Burpa tribe, all of which were being removed to varying extents.

This isn’t a flaw of the software; it’s actually working as intended. If you imagine the moment a gun is fired as captured on film, you have the frames immediately before the gun is fired, a single frame in which a bright white flash is visible at the end of the gun, and then the frames after the gun is fired. In other words, you have one frame containing a white blotch that isn’t visible on the frames before and after, which is exactly what the software is looking for. As operators, we can combat this by turning down the aggressiveness and tweaking other settings, but even when the tool is working at its minimum, false positives are possible, especially with elements like gunfire. The solution was that for some shots, and even just occasional frames, we had to turn the tool off altogether, allowing the dust to remain. The difficulty comes in pushing the software far enough that it removes as many blemishes as possible, without removing anything else. That isn’t a hard-defined line; it requires some judgement, and a lot of trial and error.

It’s a similar story with scratch removal, which works in much the same way as dust removal, in that the software looks for established parameters (in this case, vertical lines of user-set width and colours) and uses frames before and after to replace the pixels. And as with dust removal, there is the danger of false positives, in which the software picks out elements of the scene that it identifies as a scratch and tries to remove it. But even when it correctly picks out scratches, we have to be careful that its attempt to cover them up isn’t resulting in digital artifacting. A good example would be a wide shot, in which the scratch runs directly down a character’s face. In this situation, there may not be enough detail in the image for the software to adequately replicate the details of the face, and the result is slightly blurry, slightly pixelated. In this case, we would rather leave the scratch in, at least for the frames during which it runs over the face, as my preference as a viewer would be to see a film imperfection rather than a digital one.

Of course, it’s possible to go through frame-by-frame, manually removing dust and scratches without relying on the automated software. In fact, this is a necessary part of our process. In cases like the aforementioned battle sequence at the end of Khyber, we had to comb through individual shots and scenes to manually remove defects. Where possible, we choose not to do this for entire projects because it’s hugely more time-consuming, and often less accurate – you’re relying on human eyes to pick out every defect in what can be a complex image, and inevitably things will get missed. The trade off is that a human won’t mistake the flash of a gunshot as a piece of white dust, but we therefore find it more appropriate to trust the software, know it’s limitations, and correct any errors it makes along the way.

In an ideal world, we would be able to remove every defect, to create a pristine reproduction of a print from 1968. The reality is that we can get 95% of the way there, producing a result that is hugely cleaned up from the original scan, and a vast improvement over its standard definition counterpart. The last 5% is a black hole. It consumes time and money in the relentless pursuit of perfection. Ultimately, it’s better to leave in a scratch that in the future could, with improved software and experience, be removed flawlessly, than introduce an artifact that will remain. Perhaps the appropriate question is not “where do we start?”, but “where do we stop?”.

Carry On Up the Khyber is available exclusively in HD on BritBox.co.uk.” 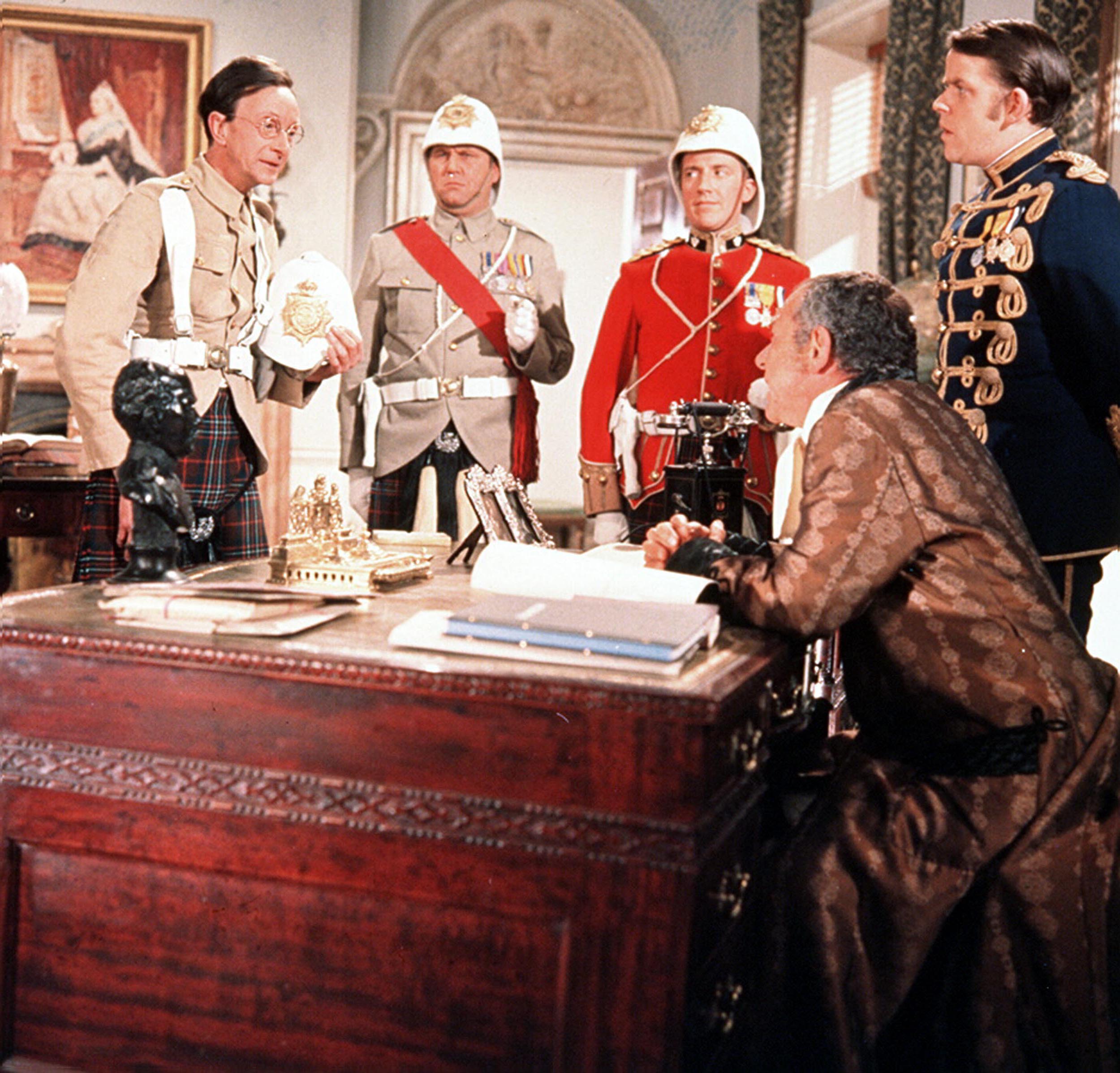